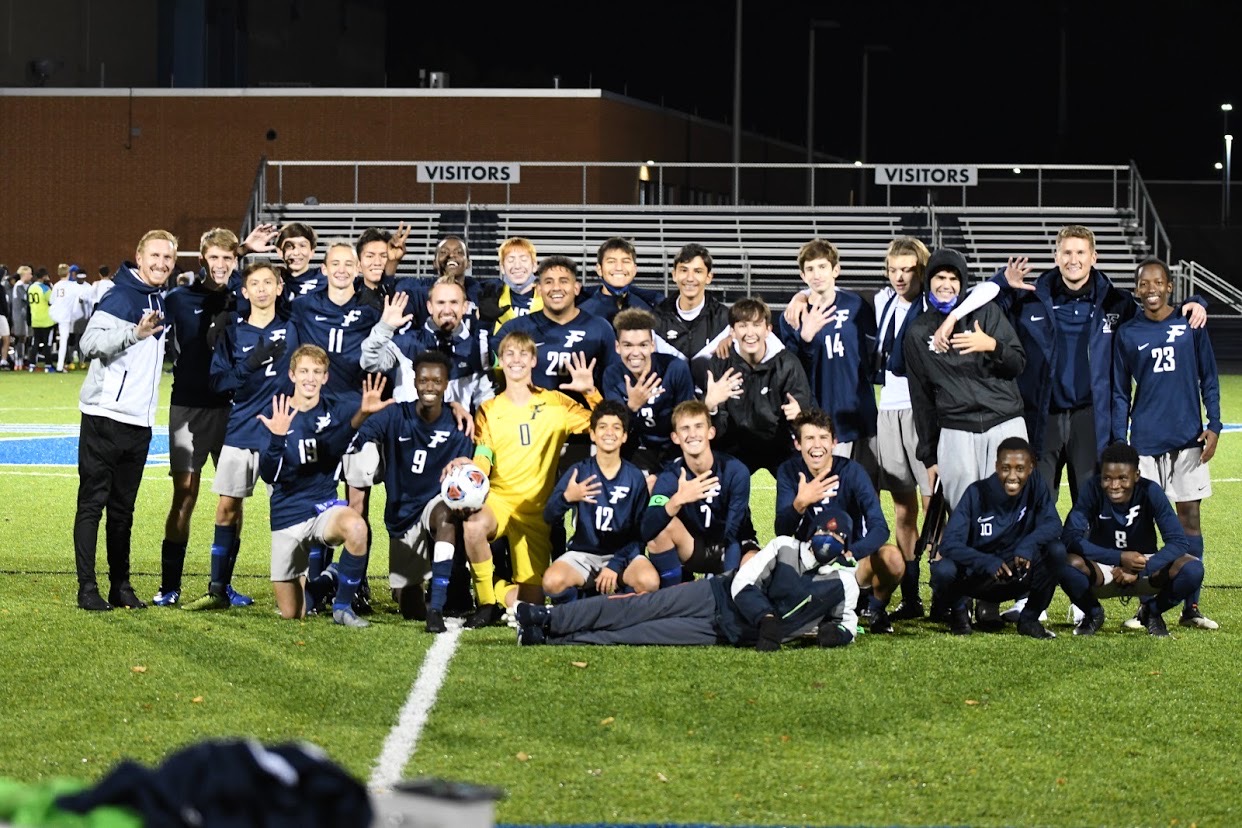 Sometimes certain numbers seem to appear everywhere. Of the Firebirds’ five regular season wins, four of them have been by a 3-1 scoreline. Last night, Fairmont continued the tradition with a 3-1 victory over Springfield High School.

Fairmont started the match tentatively, with Springfield forcing the Firebirds to defend, but the Firebirds played themselves back into the match and took control about ten minutes in. The evidence that the Firebirds were starting to take over the match was there in the seventh minute on a Fairmont free kick from Trent Webb that Bryce Roberts put his head on, but sent wide of goal. Three minutes later, a Roberts shot off a pass from Sam Mugenzi went wide. Then, at the 15th minute, a lofted cross from Roberts on the left connected with Pilote Luck in the box. Luck’s volley attempt was blocked, but he settled the ball and put it home for his first goal on the night.

The Firebirds nearly doubled their lead in the 22nd when Ryan Schreck, from the left, played the ball in to Luck, but the Springfield keeper made the save.

Firebird goalkeeper Ace Uhrig preserved the lead with a big save in the 26th when he pushed a Springfield shot over the crossbar. Uhrig did not have to make many saves on the night, but his feet were important. Five times he was off his line and out of the box to clear the ball away from danger.

Luck picked up his second goal of the evening on a far-post header in the 30th minute assisted by Sam Fiscus, again, from the left flank.

With four minutes to go in the first half, the Firebirds won a penalty kick when Springfield failed to clear the ball from a corner kick. Sam Fiscus stepped up and put the ball away from the spot.

Springfield managed a goal off a free kick in the 57th minute, but could not muster up much else, due mainly to the center back pairing of Dominic Lander-Boulis and Will Meilstrup frustrating the Wildcats’ attackers.

At the same time, space opened up in the middle of the field for Fairmont. The central midfielders, Pascal Salama, Colin Stewart, and Nawfal Nayyef, were able to move the ball around to Fairmont’s wings and outside backs, which stretched out the Springfield defense. Despite many good chances, none resulted in goals for the Firebirds, and the match finished with a familiar looking 3-1 display on the scoreboard.

Fairmont begins the SWDAB sectional tournament as the #11 seed in the North sectional by hosting #15 Fairborn High School on Monday, October 19. Kickoff is 7 pm.

Beavercreek HS
10:00 am
View All Events