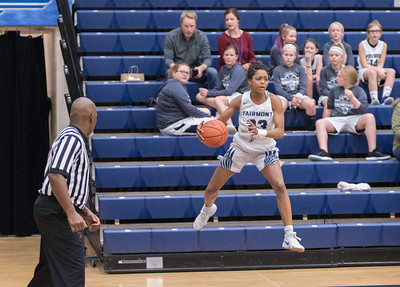 The Fairmont Firebirds played all 13 girls in a route of Springfield 88-20. Madison Bartley led all scorers with 18 points in 3 quarters of play. Madeline Westbeld had 17 points and also led the team in rebounding with 9 boards in 3 quarters of play. Sophomore Mallory Hullinger added in 13 points, Kierra Thornton 10, Makira Webster 9, Cali Boles 9, Serena Baker 10, Mari Carter 3, and Macy Schwegman 3. Westbeld, Bartley, Webster, Ketterer, and Thornton played in 3 quarters, while the younger ones played half of the 3rd and all of the 4th.

The Firebirds had a season high 25 assists and also 31 steals in the contest. It was a terrific game by the entire team.

Fairmont has a huge test on Saturday as Mercy McAuley makes the trek from Cincinnati. We need your support in a big non-conference game at Trent Arena! Go Birds!