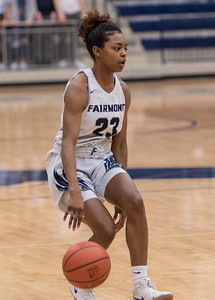 The Fairmont Firebirds came away with a 48-21 win at Trent Arena on Saturday afternoon. The Birds were led by Mallory Hullinger who scored 14 points. Madeline Westbeld led the team in rebounds with 12 for the game. She also led the team with 5 assists, along with Kierra Thornton. Madison Bartley continued to score with high percentage shots, while going 5-7 from the field. Makira Webster controlled both sides of the floor with high energy and urgency. All 13 players saw action today.

The defense for Fairmont was once again tough to beat as the Beavers trailed 29-4 at halftime while scoring two field goals. At the end of the 3rd quarter, the Firebirds led 41-9. In the 4th, the Beavers were able to score 12 additional points. The final was Fairmont 48 and Beavercreek 21.

The Firebirds are now 18-2 heading into the last week. They travel to Centerville on Wednesday and then end the regular season at home on Saturday vs Miamisburg. The Saturday game will be Senior Day for our Firebirds. Join us that day to celebrate our fantastic seniors!