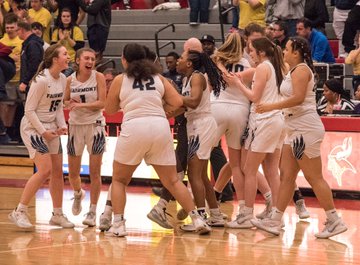 The Fairmont Firebirds beat Mercy McAuley 40-31 in the Regional Semi-Final at Princeton High School. Once again, the Firebirds zone created problems for the Wolves throughout the contest.

The Firebirds had an early start to the game with 13-3 lead after 1 quarter. Madeline Westbeld led the charge early with multiple looks around the basket, The 2nd quarter was much of the same as the Birds took a 21-12 lead at the half.

The 3rd quarter was a close quarter, as the Firebirds won only 10-8. Going into the 4th quarter, the Firebirds led 32-20. The Wolves hit a few 3’s to get back into the game, but the Firebird defense once again gained control to secure their lead until the final buzzer.

Madison Bartley led all scorers with 17 points and 12 rebounds. She was a force inside and out. Madeline Westbeld chipped-in with 12 points and 11 rebounds. Kierra Thornton and Makira Webster both added in 4 points, while Kyndall Ketterer added in 3. Thornton led the defense with 2 steals, as did Mallory Hullinger.

The Firebirds advance to the Regional Final vs returning State Champion Mount Notre Dame. MND is 27-0 and ranked #1 in the State of Ohio. The Firebirds are 25-2. The winner advances to the State Final 4. We will need a big crowd to support our Fairmont Firebirds!

The game is at 12:00 this Saturday afternoon and will take place at Princeton High School. Let’s Go Birds!