The Fairmont Athletic Department is proud to introduce Neil Craft as the next head coach of the men’s soccer program.  Neil comes to Fairmont after being on staff with Dayton Christian High School for the previous four years.  In his time at Dayton Christian, the Warriors had the most successful four-year stretch in program history, winning 61 games.  In 2017, Neil assumed head coaching duties.  In his time as head coach, the Warriors went 35-7-3, won 2 Metro-Buckeye Conference championships, 2 Southwest District championships, a Southwest Regional championship and a state title appearance in 2018.  In 2017 and 2018, Coach Craft was honored as the Metro-Buckeye Conference Coach of the Year, and the Miami Valley Scholastic Soccer Coaches Association Private School Coach of the Year. 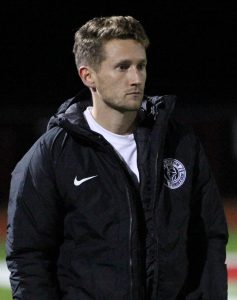 Additionally, Coach Craft has spent the last four years on staff with the Ohio Galaxies F.C. coaching a 1998 team, a 2000 team and assisting with others.  He currently holds the United Soccer Coaches National Diploma, and plans on pursuing the Advanced National Diploma later this year.  He is a graduate of Dayton Christian High School (2009), Grove City College (2013) and is actively pursuing his MBA from the University of Dayton.  Outside of soccer, Neil is a Client Relationship Manager at James Investment Research in Xenia, Ohio.  He and his wife, Lizzy, were married in 2018 and currently reside in Dayton.

When asked about the men’s soccer program at Fairmont High School, he said, “I’m honored to be a part of such a storied program at a great institution, with even better people.  This program is going to be all about the players and trying to put them in positions to be successful.  My staff and I are excited to bring a family atmosphere to our locker room and focus on building the right habits.  After that, the results will follow.”